The National Union of Road Transport Workers (NURTW), Lagos State Council under the leadership of the State Chairman of the Union Alhaji Musiliu Akinsanya, a.k.a MC Oluomo celebrate 100 days in office with success stories and unveil various achievement that its administration had achieved within the short time as Chairman of the Union.

Recall that Alhaji Musiliu Akinsanya, a.k.a MC Oluomo and the state executives council was inaugurated on Friday, 11th 2019 by the National President Alhaji Tajudeen Ibikunle Baruwa at the Union State Secretariat in Agege, Lagos. 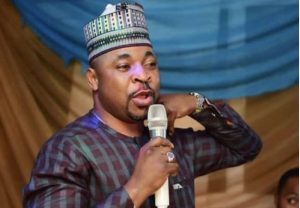 In a statement made available to Lagosspy NG by the media and publicity spokesperson of the Union Mr. Olayinka Smart, he said, “The last 100 days in the history of the Lagos State Chapter of the NURTW has been unprecedented due to the pragmatic personality of the Chairman in person of Alh. Akinsanya popularly known as Mc Oluomo. The activities of the Union have begun to take shape following the emergence of this great individual. The perception of the general public about the Union is now friendly and supportive.

“The inauguration of Alhaji Akinsanya as Chairman of Lagos State NURTW did not come as a surprise to many owning to his antecedent.”

“His charisma and philanthropic nature accounted to why all the Union members in Lagos State overwhelmingly endorsed his nomination and eventual appointment. For the past 100 days in office, he has continuously both in words and actions, shown that he is a lover of peace and he has brought an end to the era of lawlessness, violence, and thuggery among the members of the Union whereby the Union members now comport themselves orderly while they discharge their duties professionally and orderly. ” Mr. Smart Said.

The union image maker also highlighted the efforts of the state chairman to ensure that motor parks are not left out in the wave of change as the surroundings now appear more decent, neat and conducive for doing transport business like never before.

He further reiterated and debunk controversial rumors with regards to the transition of the MC Oluomo led faction administration and allay fears that Alhaji Akinsanya became State Chairman of the NURTW by a popular demand because people believe in his purposeful leadership ability.

The first point of call of Alhaji Akinsanya (Mc-Oluomo) after taking the oath of office was to caution members across the state to shield their swords and embrace peace. He summoned meeting of all chairmen across the state to seek their support towards achieving a peaceful and rancor free Union. At the meeting, he sounded a note of warning to all members that his administration was out to serve the members and ensure peace, unity and love among them.

Another mile stone achievement by the Union State Chairman was his impeccable wisdom of crisis management since he assumed office, as mc oluomo track records shows that he has resolved many grievances and he has also systematically nib in the bud potential fracas that could have degenerated into full blown crises among various members of the Union.

His ‘Open-Policy’ approach has been acknowledged to be fair to all parties anytime there is disagreement. His ability to also give fair hearing to parties and reaching a workable consensus with warring parties is widely applaud.

In his quest to ensure peace in all the branches, he had held peace meetings with various groups and stakeholders among whom were Chairman of Coker-Aguda Local Council Development Area, Alhaja Akinyemi-Obe Medinat, Area Commander and Community Development Committee Chairman, Alhaji Abdulatif Olaogun, Surulere LGA Chairman of APC, Mr Wasiu Salmon, to mention but a few in search of lasting solution to the fracas that happened within their respective areas. So far, Alhaji Akinsanya has intervened and resolved grievances among Union members in Lagos Island, Ojota, Agege, Itire – Ikate, Surulere and other areas.

In the area of collaboration, Alhaji Akinsanya has been in talk with various relevant stakeholders to ensure that the Union becomes a pride of everyone. He led the State Executive Team to the office of the Lagos State Commissioner for Science and Technology, Hon. Hakeem Fahm at Alausa, Ikeja to deliberate on the use of technology to handle transportation sector in the state. Alhaji Akinsanya wishes to use technology to checkmate the excess of erring drivers.

Furthermore, he met with the management of OPAY at the Lagos NURTW building in Oko-Oba Agege. The stakeholders deliberated on ways of fostering mutual and harmonious relationship with the aim of seeing how to ease the hardship of Lagosians in the movement of themselves and their goods. As at today, the meeting had yielded results as Opay has now created employment opportunities for many Nigerians and are having seamless operations along the length and breath of Lagos State.

Further more, Mc Oluomo also paid a courtesy visit to the Police CSP Rieninwa Philips, who is the Coordinator Inspector General of Police, IRT South West office Ikeja, Lagos while it establish partnership to work modalities on how Lagos commuters and their goods can be well protected in a crime free environment.

The Union, under the able leadership of Mc Oluomo, has been able to put together a Conflict Resolution Mechanism CRM to handle and resolve complaints and disagreement among NURTW members in the state. The Committee would continue in their good works towards achieving a greater Lagos and conflict free society.

In the area of welfare package for the workers, Alhaji Akinsanya in the last one hundred days in office has put smiles on the faces of countless number of people. The aged workers of the Union were not left out of the humanitarian activities of the chairman. Two aged persons who had worked assiduously for the Union were compensated with two hundred and fifty thousand naira each to upgrade themselves and engage in other business apart from the work of the union.

In the same vein, on the 10th of December 2019, Alhaji Akinsanya presented a bank cheque of five hundred thousand naira to a sixty year old woman, who served as cleaner in the NURTW to start up a business. This and many more are the numerous philanthropic gestures which the state chairman has carried out to ameliorate the suffering of the Union members and its staff.

The NURTW Boss has also initiated programs targeted at ensuring strict compliance with traffic rules and regulations of the state. Under this initiative, the drivers would be trained on customer relations and best professional practices in line with International standard. The NURTW will be collaborating with the Federal Road Safety Commission(FRSC) and Lagos State Traffic Management Authority(LASTMA) to exchange ideas in order to ensure orderliness on our roads and reduce crashes and accidents.

In the days ahead, the NURTW in Lagos State would continue to intensify its campaign tagged “ZERO TO ACCIDENTS AND NO TO ALCOHOLIC SELLING AT PARKS”. The NURTW boss himself will soon be going to the motor parks in the state to educate drivers on the dangers in driving under the influence of alcoholic and other dangerous substances. The campaign is aimed at ensuring that drivers are more cautious in their duties.

Alhaji Akinsanya (Mc-Oluomo) is determined to put in place measures at introducing a dedicated line that would provide opportunity to commuters to report the activities of commercial drivers who contravene the traffic rules and regulations or drive recklessly.

Mc-Oluomo led team is committed to ensuring that transport Union in Lagos State meets International standard. The team will however not be distracted by some groups and individuals that are out there to tarnish the good image of the Chairman and his good deeds. Most especially some online media platforms that are always of the habit of publishing falsehood without doing proper investigation or hearing from both parties.

In the last one hundred days, the doors of office of Alhaji Musiliu Akinsanya (MC-Oluomo) has been widely opened to every members of the Union as well as the public for suggestions and advice on how best to move the Union forward while media organizations have been so friendly in reportage of the Union’s activities and programs.

In conclusion, the Union members are once again implored to shun violence and take advantage of Peace Resolution Mechanism in putting forward their grievances, complaints and other challenges to the notice of the Union’s leadership.

“Let us join hands together to move the Union to a greater height.” Mc Oluomo concluded.