Skip to content
The newly sworn-in PDP Deputy Governor of Bayelsa State, Sen. Lawrence Ewhrudjakpo may need to provide some clarity on his BSc certificate and Letter of Exemption from National Youth Service Corps (NYSC) lagosspyng.com understands.
A critical look on his Bsc certificate from River State University of Science and Technology and his NYSC Letter of Exemption provides a huge discrepancy and ambiguity.
Senator Ewhrudjakpo Bsc certificate shows he graduated on 3rd February 1998, while his NYSC exemption letter dates 2nd February 1998. By implication, his NYSC Exemption Letter came before his graduation.
Senator Ewhrudjakpo and Bayelsa State Governor Douye Diri were sworn in on Friday by the state Chief Judge, Justice Kate.
The duo received their certificates of return from the Independent National Electoral Commission (INEC) after the Supreme Court had on Thursday nullified the election of David Lyon of the All Progressives Congress (APC), who originally won the election, over discrepancies in his running mate’s academic credentials.
Recall that Vanguard had reported that A Lugbe Grade 1 Area Court, Abuja, on November 28, 2019, issued a bench warrant for the arrest of  Sen. Lawrence Ewhrudjakpo over alleged failure to appear before it.
Ewhrudjakpo, who represents Bayelsa West Senatorial Zone failed to appear in court after the court summoned him over a pre-election suit filed against him by Mr. Benjamin Youdiowei, Chieftain of All Progressives Congress (APC) in Bayelsa.
The plaintiff alleged that  Ewhrudjakpo presented a forged NYSC Exemption Certificate with code  No: 139708 dated Feb. 2, 1998, on his nomination form to INEC.
He also alleged that Ewhrudjakpo was still in possession of the document which he continued to use as part of his credentials.
He alleged that the defendant committed the offense of cheating, impersonation, forgery which were at variant with sections 363, 368, 366 and 324 of the Penal Code. 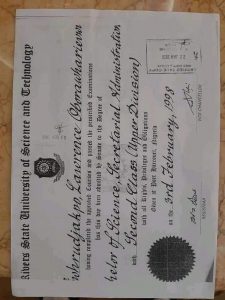 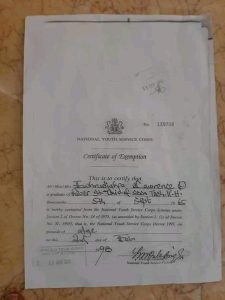